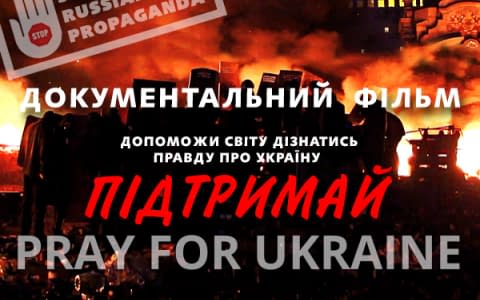 Help the World find the truth about Ukraine!

Since July 17, 2014, when Putin’s terrorists had downed a civilian airplane, an undeclared war against Ukraine stopped being a crisis only for Ukraine. The deaths of hundreds of innocent people from all around the world have become the price paid for the compromises made by the dictator.

However, Russia declared war on the whole world for a long time ago. It is not at war with guns Kalashnikov, not nuclear missiles, no tanks and aircraft. Its weapon - propaganda. The cynical, lying, naked, brutal. The victims - the millions of people both in Russia and around the hole world.

UkrStream.TV team and partners almost finalized an ambitious historical project, a documentary “Pray For Ukraine”. This film voices a true story about the resistance of Ukrainian nation against a corrupted government. It is a story of the people who came out and overthrown the dictatorship at the price of their own blood and lives. Everyone who took part in the filming and editing of the footage, everyone who has been interviewed, or shared videos and music – all these people have put parts of themselves into this film. All of them remember those days of hardship and resistance; they remember those who stood on Maidan during a brutally cold winter weather holding back hundreds of the “Berkut” Special Forces policemen in the line of fire.

The film “Pray For Ukraine” is not just a documentary for UkrStream.TV team, but it is an opportunity to tell and show the truth to the rest of the World. It is an opportunity for the revolution participants to tell their story first hand!

It is not a secret that Putin’s propaganda has successfully bended the truth about Maidan and changed the attitude towards Ukrainians and Ukraine. Many people still do not understand what really happened in Ukraine, or what launched that chain of events that led to the breakdown of Yanukovych’s regime. Thus, the documentary “Pray for Ukraine” was created primarily for the people of the world to get better understanding of the facts. We reveal the story of Maidan in a simple and unadulterated manner.

We can say without exaggeration that this film will change everyone who will see it.  In compiling this documentary, we went through the complete archive of Ukrainian revolution videos and selected never seen before footages.

We had enough resources to create this documentary. However, there is one more thing that needs to be done – we must show it to the world. Out first step in making this happen is the participation in Toronto International Film Festival in Canada

We need your help to get there!

We understand how important it is to help our guys who defend the independence and integrity of Ukraine in the eastern regions, but our film is as important as a body armor or a machine gun.

Our film is a weapon of mass information, and the effect it would have might become a turning point in an informational war with the aggressor. We do not ask for any big donations, but just one dollar, one hryvnia, or one euro can help us a lot.

Do you remember one of the mottos of Maidan? It says: “I’m a drop in the ocean, which could change the Ukraine”.

Sincerely thanks! God bless you!