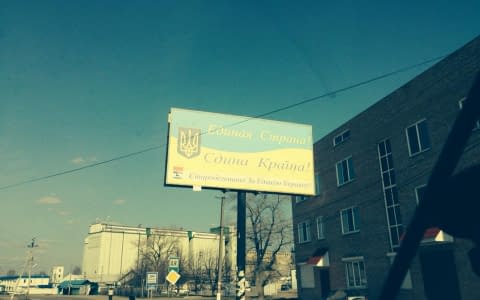 Events htat happened In Kharkiv during last two days are only a phase, not a victory, not a defeat. It made us sure again that we need to fight for our freedom. And the absurgd is that the government is not going to help us in this fight.

We want to thank to all people Kharkiv (Sergiy Zhukov, Yana Kovalenko, Andriy Taube, Ilya, Pavel, Garik, Anna and many others, who I don`t know personelly) who supported and helped us. These people are staying true to themselves and Ukraine in this hard times of careless government.

With a heavy heart we leave Kharkiv.

We're in a good mood now and here's why!
1)As we were told, RSA building of Kharkiv was released by security forces of Sumy and Poltava.
70 people were arrested! Staff of Kharkiv police, who covered the separatists, is goin to be "cleaned".
2) We were stopped by a woman that "made us" to take food for borderguard units in Starobelsk town (Luhansk reg.),and after we told her good news from Kharkiv, she couldn't hold her tears.
Glory to Ukraine!