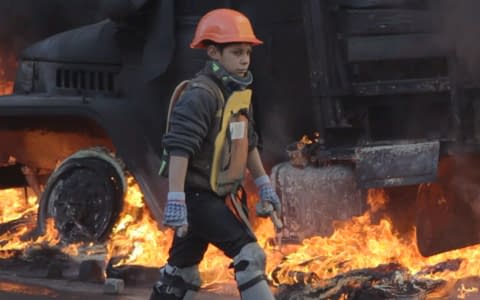 "Winter on Fire: Ukraine's Fight For Freedom" supplies a visceral, in-depth look at the bloody Ukrainian uprising in Kiev's Maidan Nezalezhnosti (Independence Square), which took place over several months in late 2013 and early 2014 and triggered a cataclysm that continues to unfold today. Focusing on the three months of street battles that led to the removal of President Viktor Yanukovych, the film reminds us how documentaries, in the tradition of works such as "The Battle of Chile" and "The Square", can have an effect different from that of daily reportage by taking more time on the craft of storytelling.

Ukraine's geographic position between Russia and the rest of Europe exerts conflicting pressures on its culture and politics. After making promises to join the European Union, Yanukovych abruptly changed direction in November 2013 and turned toward an alignment with Russia. Protestors took the streets chanting "Ukraine is part of Europe," in a series of peaceful demonstrations that were eventually met with a violent crackdown by the government's Berkut special police force.

Filmmaker Evgeny Afineevsky makes these complicated politics more approachable with vibrant characters, brisk pacing, and well-deployed graphics. He draws on multiple footage sources to chronicle the escalation of events. In this era of sophisticated cameras being more widely available, the footage possesses a higher standard of on-the-scene image-making than what we were used to seeing even a few years ago. Afineevsky shows an artistic eye in his shot selection and editing, and brings clarity to chaotic scenarios. His film captures a striking palette of vivid colours and evocative faces against a wintry landscape.

As the Winter on Fire begins, we hear a command from an unidentified voice: "Do something for the revolution!" Another replies, "I'm filming."