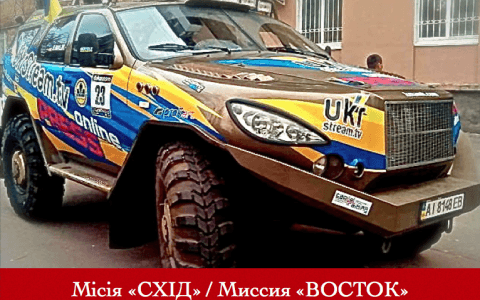 Mission "EAST" from UkrStream.TV is launched!

Mission "EAST" from UkrStream.TV is launched!

Independent Internet-TV channel UkrStream.TV starts Mission "EAST" . We are sending an expedition to the eastern and southern parts of Ukraine . During the Mission "EAST" we will organize direct webcast of the units. This will establish the connection between the military and their families throughout Ukraine that will certainly raise the morale of our army. Signal from the units will relay to their television broadcast partner UkrStream.TV channel "Espresso TV».

The team also will visit Ukrainian UkrStream.TV border checkpoints. In addition, during the Mission "EAST" online cameras will be installed in the regional centers in the Eastern parts of Ukraine.

Our first destination is Chernigiv region. We will inspect the Ukrainian-Belorussian border, and then move further east. All news, live broadcasts and videos from this expedition you can watch here: http://ukrstream.tv/en/projects/east

You can also stay tuned to the events thanks to our partners: Espreso.TV and radio Aristocrats.fm.

Our mission is possible due to great support from Kiev Auto-Moto Club, and Ukrainian GoPro distributors.