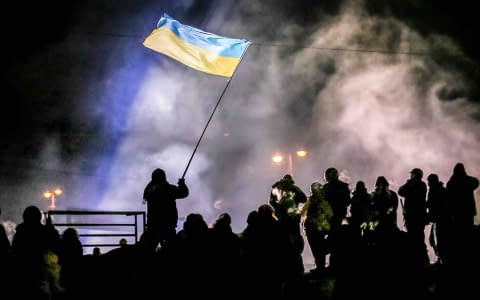 Chronicling events that unfolded over 93 days in 2013 and 2014, "Winter on Fire: Ukraine's Fight For Freedom" witnesses the formation of a new civil rights movement in Ukraine. What started as peaceful student demonstrations supporting European integration morphed into a full-fledged violent revolution calling for the resignation of the nation's president. The film captures the remarkable mobilization of nearly a million citizens from across the country protesting the corrupt political regime that utilized extreme force against its own people to suppress their demands and freedom of expression.

The harrowing documentary is set to make its world premiere at the 72nd Venice Film Festival in September.

"Evgeny has assembled a cinematic tribute to the heroism, spirit and determination of the Ukrainian people," said Lisa Nishimura, Netflix VP of Original Documentary Programming. "We are honored to provide a global platform for him to share his powerful narrative."

"While we were filming unfathomably brutal attacks by the police on unarmed citizens, we weren't thinking about how to get the best shots, only the importance of showing the ways in which the movement would forever change the country and the lives of its participants," said director Evgeny Afineevsky. "We're pleased that Netflix is enabling us to share the hard truth and shocking reality of this historical event with the rest of the world."

The "Winter on Fire: Ukraine's Fight For Freedom" filmmakers investigated the escalating political crisis in Ukraine from directly within the conflict zone. At the onset of demonstrations, they were there to record the special forces who were deployed to disperse the crowds, beating and seriously injuring hundreds of protesters. It was this moment that ultimately gave rise to mass protests and large-scale civil unrest in the country. In response, millions of Ukrainians rallied together to fight against the police state.

Through interviews with protesters, activists, journalists, medical workers, artists and clergy representing multiple generations, social classes, nationalities and faiths, including a twelve-year old volunteer, the film tells the story of a diverse movement that self-organized towards one common goal, that stood their ground in the midst of extreme bloodshed, despair and the harshest of conditions.

Netflix is the world's leading Internet television network with over 65 million members in over 50 countries enjoying more than 100 million hours of TV shows and movies per day, including original series, documentaries and feature films. Members can watch as much as they want, anytime, anywhere, on nearly any Internet-connected screen. Members can play, pause and resume watching, all without commercials or commitments.